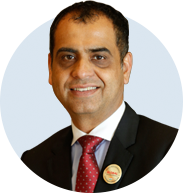 Bhupesh is heading the Strategic Accounts of GLOBAL Insurance Brokers (GLOBAL) and also handling large corporates in India and across various industries and geographies. He also heads the Sports Leisure & Entertainment (SLE) vertical in India which is the fastest growing segment in the country and has a leadership position in India.

Bhupesh joined Aon GLOBAL in 2003 and brings in 5 year’s core experience of Loss Adjusting. Before joining Aon GLOBAL he was with Anuj Puri & Associates and an associate of Crawford & Company. Bhupesh was based at Mumbai and independently handled operations of Western, Southern and Eastern India including neighbouring countries.

Bhupesh was initially inducted in Claims Division and after he had established the policies and procedures for claims handling in India, was shifted to the SLE division. He also had a brief stint with both FII and Construction & Infrastructure division of Aon GLOBAL.

He is a recipient of various awards like future leaders awards in Asia, Aon United Champion, Special recognition award from Chairman in India and globally.

He is also a Co-Chairman of FICCI’s sports committee in India (first person from insurance industry to hold such position), core group member of EMEA country in Sports vertical.