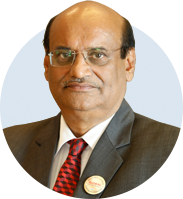 Rakesh Kumar joined GLOBAL Insurance Brokers (GLOBAL) as Director in August 2017. Prior to GLOBAL, he had a long successful career of 36 years working with Non-Life Insurance PSU Companies.

Starting his career with Oriental Insurance, he has worked at different places in India and abroad as Chief Executive of Oriental Nepal Operations. He headed Fire and Engineering Dept. of Oriental Corporate office.

In 2008, he moved to New India Assurance Company at Mumbai. As General Manager of NIA Head Office, he spearheaded the Indian Operations, Aviation, all Distribution Channel including online channel and Government programs. He was member of NIA HO Claims Committee from 2014-2017 which approves all high value claims beyond the financial authority of GM/CMD. He became the Whole Time Director of National Insurance Company at Kolkata HO.