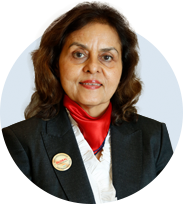 Rashmi Iyer comes with over three decades of experience in the general insurance industry encompassing Public sector, the private sector, MNC and is currently associated as Director and Principal Officer with GLOBAL Insurance Brokers (GLOBAL).

Her past experience includes the role of Managing Director of HSBC Insurance Brokers in India, (since acquired by Marsh McLennan Group) and Vice President of ICICI Lombard General Insurance. She began her career with The New India Assurance Company, the largest Public Sector General Insurance Company in India, as an Apprentice Officer and served across different functions in Operations. She was elevated up to the post of Deputy Manager at the Head Office Technical Department.

Rashmi has many achievements and won accolades for her contribution to the industry. She is the Founder Employee of ICICI Lombard General Insurance Co. and played key role in setting up the Company.

Rashmi has successfully completed a Management program at Manchester Business School in 2003 on Chevening Scholarship promoted by the FCO UK, the Fellow of Indian Insurance Institute in 1996 and National Science Talent Scholarship holder from 1974 to 1979.

She is a distinguished speaker and is invited by various media house and Associations / Trade Bodies for speaking at their respective events.